What Happens to the Unemployed When the Checks Run Out 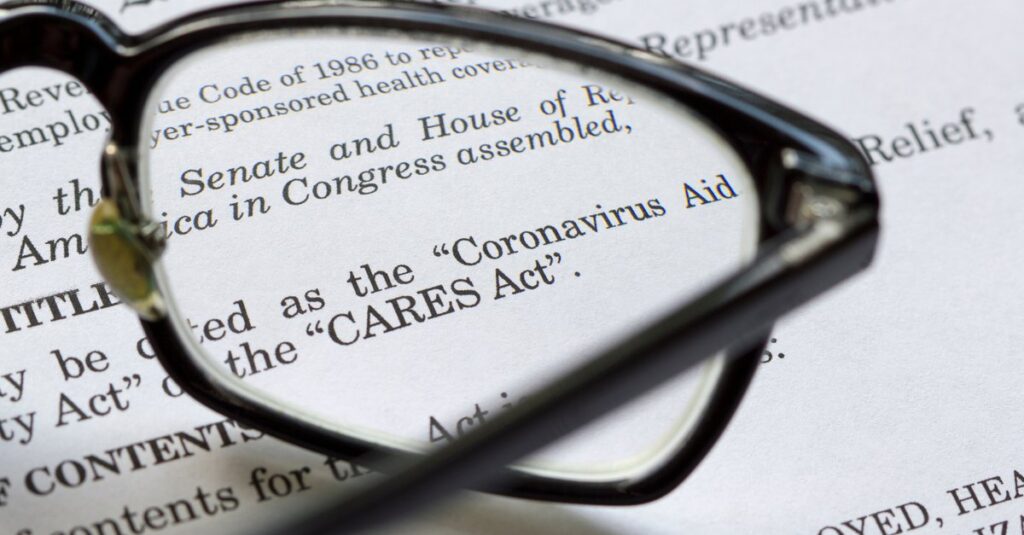 Closeup of the Coronavirus Aid, Relief, and Economic Security Act document. The CARES Act is meant to address the economic fallout of the 2020 coronavirus pandemic. Portland, OR, USA – May 3, 2020 (Shutterstock)

When jobless workers get their last unemployment check, the effect on spending is sharp and swift.

Unemployed workers’ spending on food, clothes, and other so-called nondurable goods immediately drops 12 percent, about twice as much as when they lost their job and went on unemployment insurance, University of Chicago researchers have found. Spending at drugstores falls 15 percent. Co-payments for visits to the doctor fall 14 percent. Spending on groceries falls 16 percent, or $46.30 a month, on average.

Millions of Americans are less than two weeks from cutbacks like those. The last two federal emergency unemployment programs in the CARES Act, passed as the pandemic’s first wave surged in March, expire on Dec. 26.

An analysis by the Century Foundation concluded that 12 million workers who rely on one or the other of these programs will lose them on that day. This will add to 4.4 million who will have already exhausted their federal unemployment benefits.

It projected that fewer than three million of these workers will be eligible for what are known as extended benefits, which kick in when the unemployment rate in a state is exceptionally high and can last six to 20 weeks, depending on the state.

If Congress and the administration are unable to hammer out a deal to provide additional relief, the others will be left with nothing.

“It was obvious this would be totally inadequate,” said Stephen A. Wandner, a senior fellow at the National Academy of Social Insurance, who has argued for extending unemployment benefits for a longer period, especially at a time when jobs are so hard to come by.

Mr. Wandner noted that unemployment benefits lasted up to 99 weeks — almost two years — as part of the recovery effort in the last recession. In 2003, when the nation was also recovering from the recession, maximum benefits were extended as long as 72 weeks, or almost a year and a half.

Joblessness will not only affect consumer spending. Nearly 12 million households fear they may not be able to meet their mortgage payments, according to a survey in October by Moody’s Analytics and Morning Consult. Millions of others can no longer afford their rent. And 37 percent of the unemployed said the coronavirus pandemic prevented them from looking for a job. “You are really putting coal in people’s stockings,” Mr. Wandner said.

At the end of November, 16 million people reported they had not worked in the last seven days and were relying on unemployment insurance payments to make ends meet, according to a Census Bureau survey of Americans’ financial condition. Losing those checks will translate into immediate hardship. “Come Jan. 1, a lot of people are going to be on Defcon 1,” said Mark Zandi, chief economist at Moody’s Analytics.

The expiring programs are Pandemic Unemployment Assistance, created for gig workers and others not covered by regular unemployment insurance, and Pandemic Emergency Unemployment Compensation, which extended benefits up to 13 weeks beyond their regular duration (from 12 to 30 weeks, depending on the state).

The November Census survey found that about one in four people out of work was relying on savings or selling assets to meet spending needs. One-fifth said they were still using some of the so-called economic impact payment of $1,200 that most Americans got under the CARES Act in the spring. But that is running out fast. More than one in six said they were borrowing from friends and family.

Pascal Noel, an economist at the University of Chicago, analyzed the consequences of expiring unemployment benefits with his colleague, Peter Ganong, in a study published last year. Mr. Noel noted that spending “falls substantially exactly in the month in which benefits expire, and it falls across the board.”

And that kind of shock has consequences. Mark Aguiar of Princeton and Erik Hurst of the University of Chicago have estimated that the drop in grocery spending that Professors Ganong and Noel associate with the end of unemployment benefits leads to a deterioration in diet quality: a significant decline in household consumption of fresh fruit and a jump in the consumption of hot dogs and processed lunch meat.

Jesse Rothstein of the University of California, Berkeley, and Robert Valletta of the Federal Reserve Bank of San Francisco studied what happened when unemployment insurance ended for workers who lost their jobs during the recessions of 2001 or 2007-9. Household income declines $522 a month on average, they found.

When unemployment checks run out, the poverty rate among families who received them rises from 20 percent to about one-third in the next six months, the researchers found. Other government programs, like food stamps, did not raise their income by much.

The current crop of unemployed is already in bad shape. According to the Census Bureau, for instance, by the end of November, more than one person in 10 who had not worked in the past week was relying on federal nutrition assistance, also known as food stamps, to meet needs. That is up from one in 40 in mid-July, just before the expiration of another component of the CARES Act — a $600 weekly supplement to other unemployment benefits.

Poverty, which actually declined in the first months of the pandemic — reflecting the extraordinary relief offered by the CARES Act through the spring and early summer — has snapped back with a vengeance. According to estimates by Bruce D. Meyer of the University of Chicago, James X. Sullivan of the University of Notre Dame and Jeehoon Han of Zhejiang University, 11.4 percent of Americans subsisted with incomes below the official poverty line by October, up from 9.3 percent in June.

The checking accounts of the unemployed also reflect this reversal of fortunes since the early phases of CARES Act relief, according to an analysis by researchers at the JPMorgan Chase Institute and the University of Chicago. Their account balances more than doubled from January to July, helped by the supplemental unemployment payments and the economic impact check. In percentage terms, their gain was vastly greater even than for workers who kept their jobs. Their spending also surged, peaking in July.

By the end of August, however, the last month in which the researchers tracked the finances of the unemployed, their median bank balances had shrunk by about a third since July, losing most of the cushion built up since March.

“The typical family does still have somewhat of a cash buffer,” said Fiona Greig, co-president of the JPMorgan Chase Institute, “but it is declining precipitously.”

Regular unemployment insurance in the United States remains among the least generous in the Organization for Economic Cooperation and Development, typically falling to zero after six months, barring extraordinary legislation. In Denmark or Portugal, by contrast, unemployment benefits replace around 80 percent of the lost wages of workers even two years after they lose their jobs.

In the United States, jobless benefits add up to about 20 percent of the median income for a family with two children, according to data from the O.E.C.D. In Germany and Ireland, they amount to over 50 percent.

Emergency legislation like the CARES Act has provided an intermittent boost to unemployed American workers during crises. But barring new action by Congress in the coming days, the safety net will revert to its previous state. Millions will fall through the cracks.